The most looked at item in your home
Back to All Articles
Posted: October 4, 2021

The most looked at item in your home

Eye-tracking technology has been used to identify the exact areas and decor trends that people’s eyes are drawn to when visiting their family and friends. Turns out the kitchen floor, bathroom mirrors, home office chairs and throws on a bed are just some of the top 10 things people focused on the most when visiting.

This is according to new research from Confused.com. Perhaps unsurprisingly, given the amount of time spent working from home over the past 18 months, office chairs beat all other items in the home as the most viewed, amassing a total of 410 views.  Kitchen floors, with 323 views and maintaining the gaze of visitors for 2,987 milliseconds, are the second most viewed element, and the cot in a child’s bedroom came in third place. Bed throws came fourth and kitchen cabinets fifth.

READ: Built-in appliances are having a moment. Take a look at these high-end designs

To conduct the study, a  sample of 71 people were shown a series of images of different rooms in a home and eye-tracking software was used to identify the total number of times people looked at different elements in the room, like the flooring, the windows or the artwork.

Bathroom mirrors and drawers under a bathroom are both among the top 10 areas of a home that people looked at the most. In the bedroom, a throw on the bed and a chest of drawers also made the top 10, and in the kitchen, it’s the floor and the cabinets that were inspected the most.

The top 10 areas in a home that people looked at the most:

The kitchen is possibly more integral to family life than any other room, and with the rise of the kitchen-diner, it’s now where so much of family life takes place. In the kitchen, the research shows it’s the floor that people’s eyes are drawn to the most, pulling in over 100 more views than cabinets, which came in second place, and almost seven times as many views as the sink in third place.

In the living room, soft décor and key furniture pieces attract the most attention. Coffee tables, rugs and decorative cushions pulled in the most views, each with over 100 glances. Although cushions came third when looking at the number of views, they appeared to hold attention for the longest time out of all other elements in the living room. 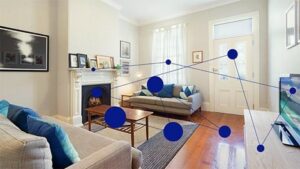 When it comes to the room we use primarily for self-care and grooming, it’s perhaps no surprise that it’s the mirror that attracts the most views. Just behind in second place, it’s the sink drawers and then the sink, toilet and bath ranked in third, fourth and fifth positions.

The bedroom
In the bedroom, it was the throw at the end of the bed that pulled in the most views and was looked at for the longest. Art, the flooring and the curtains were the things that people looked at the least when glancing around the bedroom.

The child’s bedroom
In the child’s bedroom, it was the cot or bed that was looked at the most and for the longest. Interestingly, art ranked as one of the least attention-grabbing elements in the kitchen, living room and bedroom too, with artwork gaining the most attention in the home office, ranking in fourth position. 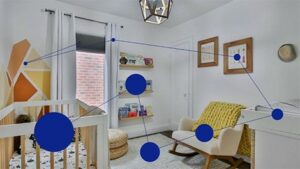 More of us have worked from home than ever before over the past 18 months, the office chair by far the thing people looked at the most and for the longest amount of time. Surprisingly, the desk itself was one of the elements that was focused on the least, pulling in just 20 views, compared to the chair’s 410.